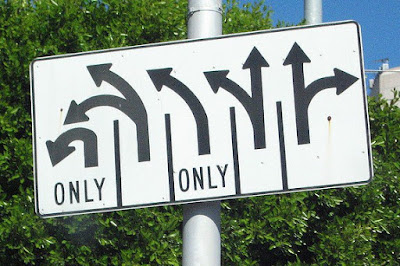 It seems as though there are a gaggle of people who seem to hate to have blank spots on their "maps".

Usually, lacking enough life experience, many remedy this by simply winging-it with some best guesses.

Perhaps saying it makes us feel dumb or weak? Maybe we got yelled at once? Perhaps, we got made fun of because we didn't know something ...or everything?
Regardless of the reason, the phrase: "I Don't Know...(yet)" has definitely not been on the menu at many schools!
Guessing and Assuming - Does it really feel that much better than Asking and Learning???

Maybe years ago, we felt empowered by being smart enough to "figure out" that 1+1=11 all on our own! And as long as there was no one there to checked up on us and nobody around us knew any better? ... It was: 1+1=11 for Everybody! -- Yikes!
As a speaker, I cannot tell you the number of times I've walked through the halls of various schools, hearing this assumptive practice in full force. The Assumption Mills just churning 'em up, and spitting 'em out!
While the: "Hey...Let's Find Out From Somebody Who Actually Knows" Vending Machines sat, waiting. Student Free! Ummmm....Hello???

Anyone that knows me knows me well, knows of my complete distain for too much unnecessary Assumption. Maybe it's because I have seen, first hand the harm it has done to the lives and dreams of my students. It's unfortunate they tend reach out to me once they are already soaking wet, from swimming lap after lap in the River of Assumption ... Only then realizing just how much of a mess their situations really are. I am definitely very very very familiar with professional knot un-tying --

I'll often ask during clinics: "Are we truly Educated Enough to make that Educated Guess that we are about to make...?"

Many of our life "maps" lack real and fundamental pieces, and deep down...we know it!
Sure...The "maps" have mountains and bridges and buildings and rivers and Taco Bell's. But all with asterisks next to them! As if to say: "I didn't know for sure at the time, so I Best Guessed many parts!"

Shoot! Many people's internal "maps" are so full of asterisks, you can barely see the stuff that's real!
-- Not exactly a confidence booster.

Especially when school is almost over and the time is coming up for us to rely on these ridiculous maps for our survival! And because of which, we have to live with crazy fear. Because deep deep down, we know that our "maps" are pretty much just a complete pile of S&%@ !

Is it funny how Fear plays such a huge role in some people's lives? -- It's not all that funny really...

We all know that "Fear = A Lack of Proper Information" and we also know that Fear tends to vanish when we know what to expect and count on.

So then, it's pretty easy to see that: 1) an inability to say "I don't know...(yet)" -- Power Mixed with 2) the avoidance of: "Hey! ... Let's go find out from someone who actually knows the facts"... This is already a pretty bad mix!
But now, couple all of that with 3) the absolute willingness to "best guess" answers...?
Spells .... Disaster!
Remember -- "Fear is like Beer: A little is good, but too much and you'll wind up doing the walk of shame...with vomit still on your Prom dress."

Assumption. It's maybe time we stop denying the harm it does.

Especially when the phrase: "I don't know...(yet)" is like kryptonite to it -- We should give this phrase a try!

I mean, seriously: Would you trust a 10 year old to "best guess" you a map to drive from say, Portugal to Eastern China? ...Yep?
-- Me Neither!

I'll just go to the map store, thank you very much! That way, when I want a Taco Bell...
... It will Actually Be There!