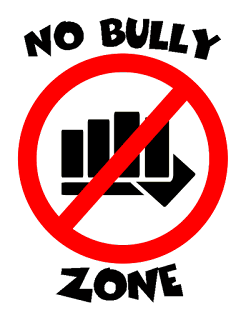 Bullies are just the worst!

It's like their sole mission in life is to cause us suffering and pain. As if for them, the more pain they cause the better they feel - and though at some we can all feel a bit sorry for them -- often times we just wish we could lash out and settle the score once and for all!

North Texas State University in the 1980's was a pretty interesting place to go to school and a great place to learn. It was (then) also one of the top 5 schools to choose if a playing career was something that interested you.

But, for me it was a also place for some pretty heavy and painful Bullying!


I pretty much had two types:

One was the "Turf-Sensitive, Cocky, Punk College Kid":

This guy loved holding court in the main hang-out area in front of the Concert Hall. And no matter the situation, he could somehow always conjure up something negative or sarcastic to say every single time he saw me.
It was just one ugly, hate-filled slight after the next - Always said aloud and always within earshot of my fellow students.

-- One really truly mean spirited thing he said that's stayed with me over the years, was: One time, when this punk saw me carrying a piccolo trumpet case while I was walking through the main hang-out area...(Bear in mind that at this time I was also currently the first ever African American person to play Lead Trumpet in the North Texas State University One O'Clock Lab Band.
... More on that later.)
This bully, who I'll call "John Kormack"... (not his real name), spots me walking and carrying piccolo trumpet case and just unable to help himself (once again) he snorts quite loudly: "Hey Frankie - You off to practice your Lew Soloff licks?"

Now, this was meant to be a slight towards me, but in reality it was largely just him (once again) showing his ignorance, because Lew Soloff at that time was actually one of the best trumpeters in the world!

About a year later, I was pulled out of college early to join and tour with Woody Herman and the Thundering Herd -- and Bam- What do you know - There was a bunch of PICCOLO TRUMPET stuff in the 2nd trumpet-split lead book. (This was also great because you make even more money for playing the piccolo trumpet parts!)

I now live in NYC and fairly quickly upon moving here, I meet and became quite good friends with: Lew Soloff!

What an honor it was and is to know and have known him - and played with him so often.

Just for fun once, while recording a TV thing with Lew, I mentioned this punks' name and asked if Lew knew of him or not.

Have to say ...That brought a smile!

- Thanks for the push, John!

The Second type of Bully was: the general, Hate-Filled Bully:

For me - These were the bullies who constantly called me the "N-Word"!

I received the full compliment of this.

Playing Lead Trumpet in the One O'Clock Lab Band at NTSU (now UNT) then was and is still a huge honor - and was a huge source of pride for my Father, as well!

During the 5 sequential semesters that I re-auditioned and was selected to play Lead Trumpet in the One O'Clock Lab Band - You can imagine that I heard the 'N-Word' Quite A Lot...And I did!

Most often it was said behind my back or just after I'd turned a corner - But always sad loudly enough for me (and others) to hear it!

But Never, Ever did I dare confront anybody about it or say anything back.

Back then, (and maybe even now) we know that would have been a huge huge mistake!
-- You just had to feel horrible and angry and sad.... and just Take It!


But, like my Grandmother always suggested ... I never gave up.
I always chose to stay undeterred.

Because otherwise, they win and they steal your life from you - and That's exactly what they want: To have You ...Un-Empowered!

My Grandmother always told me: "When folks start to do this stuff like this...it usually means you are getting warm and there is fear there. Their fear!
Their fear of what you, achieving your goals and dreams means for Them!"

(Disclaimer: If somebody is hitting you or threatening violence and hurting you, then you need police or legal help. ASAP!)


She told me that Choosing to be Undeterred is not ever easy, but it is opting to not stop, but instead use the garbage these bullies throw at us and let it push us to kick some booty!
For us to have a great life, in spite of the crap they do and spew.... Because a great life is something these hate-filled, garbage-spewing punks will never truly have themselves.
Having a great life and a great time? ...Is just the best Revenge!
My Grandmother was very cool!

Side note: Later, during my years touring, playing Lead Trumpet with Maynard Ferguson, he and I often talked about my days at NTSU.

I'd told him about the bullies I had to deal with, and how hard it was Not to Fight Back, my Grandmother's words and the choosing to stay undeterred.

Maynard said in response: Well, it's a good thing! (said with that grin only he got) -- I'm glad you didn't give in and let them win. Because if you had, I would have never met you and I couldn't have had you here with me to play Lead Trumpet with my Band..."

It's those moments that I am so glad I didn't let the bullies win years ago.


So.....Stay Strong - KMF - Live Your Dream Life - and Let the bullies Choke On Your Dust!